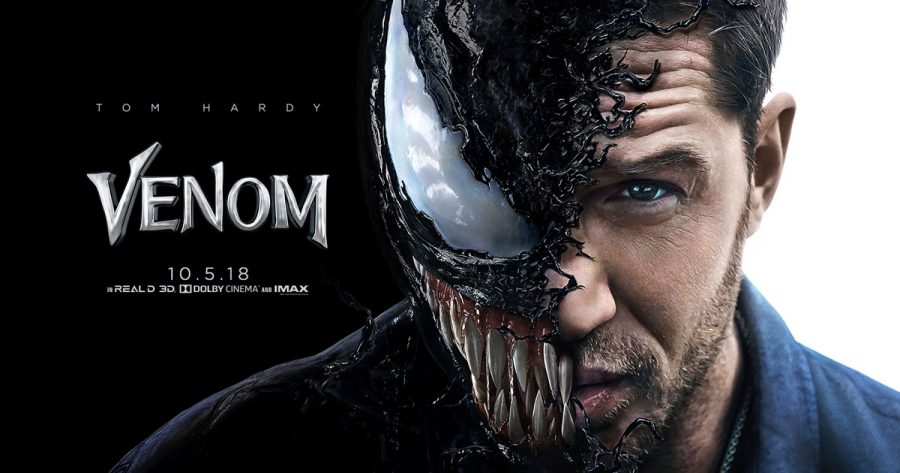 In a market saturated by superhero movies and blockbusters, there are bound to be some that miss the mark. Sony’s Venom is such a superhero movie. Existing in a weird, nebulous area in between Marvel’s Spider-man movies and Sony’s rights, the legality surrounding the film mirrors the actual movie: chaotic, messy, and ill-executed.

Venom is about Spider-man’s arch-nemesis, Eddie Brock. The problem with making a movie about a superhero’s main rival is that much of the plot should depend on the superhero. But, Sony is proving difficult to work with as far as shared properties go, sharing Spider-man rights with Marvel but retaining almost all of his villains. Making a Venom movie without Spider-man is like getting a BLT without bacon; it’s jarring and feels off from the outset.

Tom Hardy stars as the titular antihero and, to his credit, worked with what he had very well. The lines written for him were at times off-putting and odd, but Hardy definitely gave the role of Eddy justice. The back-and-forth between Eddy and the alien that grants him his role as Venom is entertaining, and it is unfortunate that Hardy wasn’t in a movie with a better script.

Venom feels rushed and sloppy. The plot feels inadequate as a result of trying to compensate for a lack of Spider-man, and as a result the supporting cast feels underdeveloped. This is especially true for the villain, a stereotypical corporate/scientist bigwig with superpowers. I could not take him seriously, and the ham-fisted dialogue that was written for him did not help things either. The visuals were also extremely inconsistent. Venom’s suit is an alien, so CGI is a big part of the film. At times, it looks super crisp and Venom looks incredibly polished, and at times it looks like a food fight is happening on screen.

Venom was meant to be a launching off point for Sony’s cinematic universe with all of the Spider-man properties it owns, but without Spider-man it seems like those movies will be incomparable to the Marvel megagiant. I do think that if Venom had the right writers, and maybe an R-rating to keep it true to the character, than it could have been a good movie with a good lead and good action. But, Venom falls nowhere near what Marvel and DC has done in the superhero movie genre.