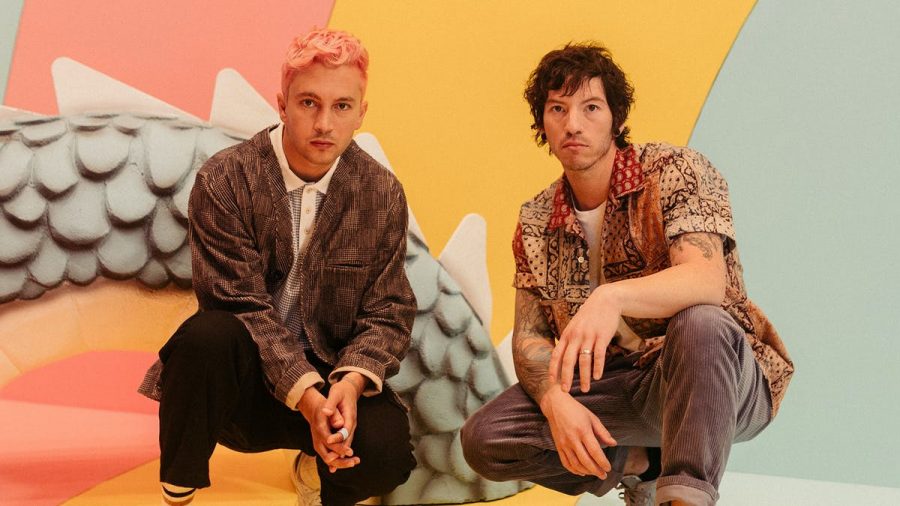 On Friday night, May 21, my inner middle-school self was jumping for joy when my friend informed me she bought tickets for the Twenty One Pilots Live Stream, where the band would debut their new album “Scaled and Icy.” Since I’ve been listening to them since middle school, there was no way I’d turn down this opportunity to join her, her sisters, and their friends in watching the virtual live show. Twenty One Pilots is made up of Tyler Joseph, the lead singer, and Josh Dun, the drummer. After a brief hiatus, the duo announced that, after 7 months of planning and two weeks of rehearsals, there would be a livestream to debut their sixth album. The pre-show began at 5 PM, in which they played clips of their old tours, funny memories throughout the years, and a Q&A with the two boys. Three hours later, at 8 o’clock, the official virtual concert began. The concert lasted only an hour, but it was one of the best hours of my life.

There were many firsts for the band in this livestream. Fans noticed how different this album sounds compared to their older music. Despite the duo being very diverse in their styles, it is much more upbeat and bouncy, however, as always, the lyrics are much deeper than they seem. Also, Tyler showed off his new fancy footwork, accompanied by a large cast of support musicians and dancers. Many fans were not too fond of having new members alongside the duo, who usually work alone. However, the new cast members did an amazing job, so I’m sure people will warm up to these talented individuals soon.

The livestream begins on the set of the fictional Good Day Dema talk show. Dema is the dystopian city at the center of the storyline of Tyler and Josh’s previous album, Trench. There has been a storyline for the past few albums that the fans have been making highly creative theories for. In brief terms, Dema, a tower of silence ruled by nine bishops, represents the negative feelings and self-doubt that the duo have both experienced throughout their lives. The protagonist, named Clancy, is attempting to escape Dema. He is aided by an outside group called the “Banditos,” who are trying to escape as well. Unfortunately, Clancy continues to be pulled back by the main bishop, Nico, and his followers. By the end of Trench, it was unclear whether Clancy had managed to escape Dema or whether he was still being brainwashed. Many speculate through hidden clues that he is dead.

Regarding “Scaled and Icy,” many fans believe it is Dema propaganda for several reasons. The new logo, called a sai (which also is an abbreviation for “Scaled and Icy”) is thought to be the logo of the bishops. The official Twenty One Pilots logo, |-/, is nowhere to be seen. This caused fans to believe the leaders of Dema are controlling them and what music they produce. Also, in the video for their Christmas single Christmas Saves The Year, “SAI is propaganda” is hidden on the wrapping paper of a present. Now, fans understand that SAI is the abbreviation for “Scaled And Icy,” resulting in the propaganda theory. Dema has brainwashed the boys into making music that’s more widely appealing as a way of spreading Dema’s beliefs. Many fans seem to agree that the duo look as if they’re being controlled throughout the video.

At the start of the show, Tyler Joseph takes a seat on the ‘70s themed couch for an interview with the two hosts who cracked corny jokes as the singer looked increasingly uncomfortable. He eventually ignored them as he walked to a colorful set to perform the new album’s second single, “Choker.” Joseph is accompanied by the album’s mascot, Trash the Dragon, who is seen sticking out of the floor. The sets looked so beautifully created and planned out. Nine red-hooded figures, representing the bishops, soon joined Tyler as he sang and Josh played the drums behind him. Throughout the show, the hosts and Dema advertisements interrupted the duo’s performance. These informericials gave Tyler and Josh time to switch their outfits and sets. Several hidden messages and clues were in the background of the sets for fans to spot and theorize about. As the boys sang more songs, switched sets, and danced throughout the night, the hosts began to appear more beat up, blood dripping from their noses onto their shirts and their eyes turning orange. This left many fans, including myself, confused about what this meant. How did this major detail add to the storyline?

The whole night was an homage to the band’s various looks, designs, and characters throughout their eras. Both of their wives, Debby Ryan and Jenna Joseph, made appearances, making the fans go wild! After an amazing hour had passed, Tyler made his way back to the couch. He performed a short reprise of “Choker,” ending the show how it began. With this, the camera swung around to show the abundance of crew members. Then, the camera zoomed in on Tyler and Josh standing arm-in-arm, taking a bow. However, just because the live stream ended does not mean the fun has to end! After the concert, fans were able to enjoy the experience of exploring around the livestream website, where fans hunted for easter eggs and clues as to what is exactly going to happen in this new era.

In my opinion, I enjoyed every millisecond of the livestream. Each exhilarating moment was so exciting and had me jumping up and down! My friends and I screamed everytime Tyler or Josh did pretty much anything, to be honest. This was the best experience I’ve had in a long time; it was definitely worth the dreadful wait. I’m so grateful my friends invited me to join them in experiencing this special event, I wouldn’t trade this memorable experience for the world.