The History of The Christmas Tree 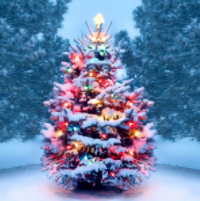 Christmas is coming up soon, and most people already have their Christmas decorations up in preparation for the festivities. Typically, the type of tree chosen (be it real or fake) is the evergreen tree, which stays green all year round. This carries symbolic significance as people in the winter, as they believed that winter was a time when the sun god was sick, and these plants reminded them that there were warmer times to come. They put up evergreen boughs all around their homes believing that it will keep away bad spirits and illnesses, and celebrated the solstice because it meant that the sun god was feeling better. Several groups like the ancient Egyptians, ancient Romans, the Druids, and the Vikings followed in this tradition, each with their own variations of the same beliefs.

The modern Christmas tree tradition is credited to the Germans for starting it in the 16th century, when German Christians brought the trees into their homes and decorated them. Martin Luther of the Protestant Reformation is believed to have been the first to add lit candles to the tree, contributing further to the modern Christmas tradition we know today. It was brought by Germans to America, the first one on record being in the 1830s in Pennsylvania, but it was in their homes in 1747. Most Americans were not fans of this tradition, and that explains why most Christmas traditions were accepted later in American history. At this time, it was viewed as a pagan tradition.

All that changed in 1846, when Queen Victoria and German Prince Albert were drawn in the Illustrated London News standing around a Christmas tree with their children. Queen Victoria was popular with her subjects, and they followed in what she was doing, wanting to be like her. This sentiment extended beyond her own subjects, and soon ornaments were arriving in America from Germany, with the tradition growing stronger in the United States. Over time, with new ideas and inventions (such as electric light), the tree grew more and more familiar to the ones people put in their homes every year.