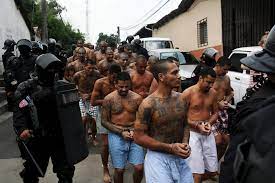 On Saturday, March 26, El Salvadorian police reported 62 murders in a twenty-four-hour time period and 87 people killed during that weekend due to gang-related violence. In a country of over 6.5 million, this level of bloodshed had not been seen since El Salvador’s brutal civil war ended thirty years ago in 1992. President Nayib Bukele, elected in 2019 from a campaign that promised to battle organized crime and increase security, requested the country’s legislature to approve a thirty-day extension to the already established state of emergency. Parliament granted this measure and continues its crackdown on gang violence.

New laws put into place temporarily suspended certain civil liberties guaranteed by the Constitution. Communications such as phone calls and emails could be monitored without a court order and the right to gather, to an attorney and to be informed of rights upon arrest were all restricted. Suspects could also be held without charges for up to 15 days and arrests could be conducted without warrants. The age of criminal responsibility was reduced to 12-years-old and Congress authorized prison sentences of 10 to 15 years for anybody (including news outlets) that distributed gang messages or imagery.

Over 17,000 people suspected of having gang affiliations have been arrested since the original state of emergency was declared. However, one local resident believes that once the police and military leave, the gangs will once again take back control as if nothing happened. MS-13 and Barrio-18 gangs have over 700,000 members and are responsible for murder, extortion, and drug trafficking, especially in El Salvador’s poorest communities. They control large amounts of territory through force and fear.

In retaliation to this uptick in violence, imprisoned gang members have been subject to maltreatment; denied food, mattresses, and frog-marched around prison grounds. This raised the question of human rights violations within several human rights organizations such as the office of the United Nations Commissioner for Human Rights which stated that those arrested “have reportedly been subject to cruel, inhumane, or degrading treatment.” Not to mention that these arbitrary mass arrests were commonly based on a person’s appearance or place of living. This opens the possibility that non-gang members and innocent individuals have been arrested as well.

Nonetheless, it remains to be seen how effectively the El Salvadoran government will combat this issue and whether or not the end will justify the means.