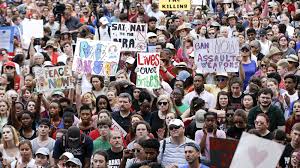 This March has been a month of protest and rallies for everyone across the country. Since the deadly shooting that killed 17 people at Marjory Stoneman Douglas High School in Parkland, Florida on February 14th, students all over the country have been holding rallies in which they are calling for stricter gun laws. In fact, even other cities in the world have organized such events.

On March 14th, student walkouts took place in many American schools. At 10:00 AM, students walked out of their classrooms for 17 minutes, to honor the 17 victims of the Parkland Shooting. Some schools held rallies, moments of silence, or protests.. Students made signs showing their requests to end gun violence and make schools around the nation safer.

Additionally, President Donald Trump called for a change in legal age to purchase guns to 21. Other lawmakers have also been trying to move the gun buying age to 21 as well. Dick’s Sporting Goods, Walmart, and other stores have done the same thing, and Dick’s has ended its sales of assault-rifles.

On March 24th, thousands of students from all over the country hit the streets to march against gun violence. The march was called the “March for Our Lives.” At the Washington rally, some of the survivors of the Parkland Shooting spoke about trying to take steps to end  gun violence in the United States. For example, students stated that gun violence should never occur at places like schools, concerts, movie theaters, or restaurants. At some rallies, students held pictures of victims of gun violence.

All in all, the tragic Florida High School Shooting made way for all of the subsequent events that called for change in gun control. It led to tons of marches and rallies on the streets of many American towns, neighborhoods, and cities. Now, as one nation, we must come up with an ideal solution to lower the risk of gun violence.