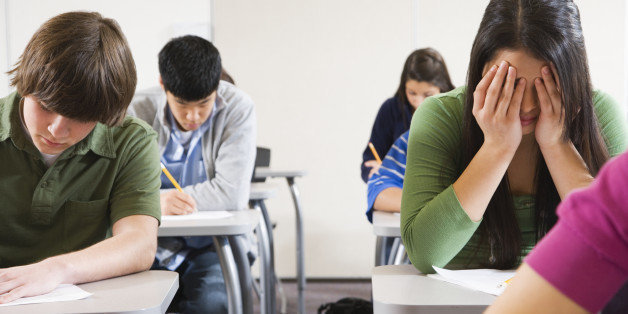 Everyone is stressed out about standardized testing.

Unless you’ve reached past that point (if you’re a senior, most likely) and you no longer have to worry about it, chances are, you’re worried about it. Even if you’re a freshman, you probably hear your parents or peers or teacher stalk about how important the SAT is, or how hard the ACT is, and maybe you tune it out for now, but, come your junior year, you won’t be able to.

Some students and teachers even disapprove of standardized testing, as do some colleges. Certain universities have begun to remove their standardized testing requirements. Aside from the argument that testing is an unfair measure of a students ability to learn, to work hard, and to succeed academically, many people believe the stress that testing brings on top of regular school work and stress is just absurd.

And, believe me, if you’re a student and you haven’t reached your junior year yet, you’ll likely come to agree.

In an effort to prove this, and to get further feedback from students who have faced the SAT and ACT several times, I interviewed four Colts Neck High School seniors on the matter. I asked the following: How do you feel about standardized testing, and how has it affected you?

Here’s how they responded:

“I feel like standardized testing is an unfair way to measure student’s intelligence… and it doesn’t show their real qualifications to be accepted into college. Some students are really smart in school and do well because they have the time to prepare and study…but the timing of tests is usually what messes people up. And some people may not want to go into math or english but with standardized testing they are forced to take those sections. I have studied for more than 200 hours for these types of tests… especially the SAT… and still have not gotten a score good enough for my dream school… which I’m confident my grades and extracurriculars could get me into but not my test score. It also stressed me out because I had to focus on it on top of schoolwork during junior year…and I feel that it is an unfair way to compare students globally to one another.”

“I feel like standardized testing has implemented this idea on society that you have to conform to a certain type of learning in order to be considered smart…which, for many people, isn’t the case. Many students don’t test well…and it’s due to many things that doesn’t always mean a lack of knowledge. Having this standard to test someone’s knowledge on certain topics negatively affects people who don’t test well and don’t actually reflect their intelligence.”

“Standardized testing honestly made my junior year so much more stressful than it should’ve been. I remember when somebody would say the word ‘SAT’ I would get so stressed out over upcoming tests or scores – it literally just gave me anxiety to hear the words, to think about it, like I just hated to think about it. And I just think that it’s ridiculous how much a three-hour test can weigh in determining your college admissions. They take the SAT and ACT into so much consideration…For me personally, when I took the SAT, I went into it blind in December and I really didn’t do well, I started crying to my mom about my scores and so she signed me up for small class and honestly, I don’t even think the class helped me that much…I think the practice that I did myself helped me to improve my score.”

“Like most high school students, I strongly dislike standardized testing. I feel like it’s not an accurate way of measuring how well a student is at math or at reading or writing. Because for one part, a lot of people take extra classes like Focused Coaching or Princeton Review and that is basically defeating the whole purpose of taking a standardized test because you’re supposed to take the test with the knowledge that you know but in reality it’s just that people are learning, like, tricks to ace the test just to get a good score, and I feel like that just defeats the whole purpose of standardized testing. And I feel like it also reduces students to a number… Well, this is another reason why I think standardized testing is just awful because while I could be spending my time getting involved in extracurriculars or doing community service, instead I’m spending my nights studying for the SAT. And, I think that’s a really sad way to be spending my nights because I feel like there’s a lot more meaningful things I can do than studying for a standardized test.”

Jennifer, Amanda, Elizabeth, and Rachel all agreed on one thing: the SAT brought them a great deal of stress that they didn’t want, nor need. With the responsibility of maintaining grades, managing clubs, participating in sports and outside activities, and applying to college, the demands of preparing for standardized testing was almost – and was – “the tipping point” of stress overload for many students.

The best advice I could give, as someone who agreed with all of the above, and who has experienced standardized test-stress myself, is this: try your best to find a balance, and really out aside time for studying. It doesn’t have to be seven hours a day, but maybe a half hour or an hour everyday, and that will help your knowledge build overtime on a much more bearable schedule than cramming the last few weeks before a test. Also, stay calm. The stress can get overwhelming, but you have to tell yourself that the more you study now, the less likely you’ll be to have to take the test again, and the sooner you’ll be free from all the stress it brought you. And, if you don’t get the score you thought you’d get, don’t panic. Sign up for the next test, and focus only on your mistakes and how you can improve them for the next time.

To all entering the test-world now, I wish you great luck. This wasn’t meant to scare you, but to expose the true nature of testing, and how crazy it truly makes us students feel.