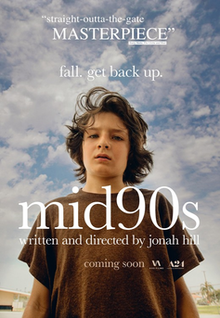 Another month, another directorial debut. This month I had the privilege of seeing Mid90s, a small film directed by Jonah Hill who has wanted to step behind the camera for a very long time. For his inaugural filmmaking venture, Hill capitalizes on modern nostalgia and takes us back to, you guessed it, the mid 1990s. No specific year given or needed, as the general culture and “feel” of the era was on full display. And while I obviously didn’t live through this time, it still felt unbelievably authentic as a period piece, from the clothes and cars, to background scenery and dialogue. Hill was a perfectionist when it came to authenticity for this film and it really paid off, as it painted a world I had always heard about, but never felt as immersed in as I did during this movie. As for the movie itself, it is a snapshot into a few crucial weeks of one boys life, and his journey from child to adolescence. Running a little short at just under an hour and a half, the movie certainly leaves a little more to be desired, but what it does offer is a deeply realistic and relatable look at this phase of everyone’s life. Our protagonist is Stevie, a tween boy who lives with his bullying older brother and single mother in Los Angeles. He one day stumbles into a skate shop and meets a tight knit group of 4 friends, all united by their love of skating and their struggles living as lower middle class Americans. Stevie, younger than any of them, is quickly adopted by the group, and taught how to skate. This skating gives purpose to Stevie, as we see him find himself in his new friends and hobbies. And from this comes some of the best scenes in the movie. Scenes of 5 friends ripping on each other and doing nothing really, something all teens can relate to. But Jonah Hill makes these scenes heartfelt and hides wisdom in the words of our 5 delinquents. And when we are not treated to the 5 friends just chilling, we are riding with Stevie as he encounters the throws of adolescence. Trying to impress his new older friends, failing at it, fighting with his mom, his first crush…all real and relatable memories most moviegoers have, which helps to keep them engaged in his story, a story that is really immaterial. Jonah Hill did not seek out to recreate the entire 1990s or redefine the coming of age tale. He told the simple story of one boy and the 4 friends that he met as his boyhood wanned. And he choose the backdrop of not just the 90s, but the LA Skating and hip hop culture that was so important to him and many others. Jonah Hill grew up skateboarding in LA and it was an extremely influential subculture for it’s time. Jonah Hill was able to shed light on would have otherwise been a forgotten sect in the skateboarding movement. To put it simply, Mid90s is a chill flick. This movie isn’t gonna make you cry or bend over laughing. You won’t be seeing the world differently or amazed with special effects. But by the time teh credits do roll, you’ll have smiled, you’ll have frowned, and most of all you’ll feel apart of a group of 5 guys with no idea where they’re going but just happy to be on their skateboards and with each other. I’d recommend it, especially if you miss the days of being young, dumb, and happy.