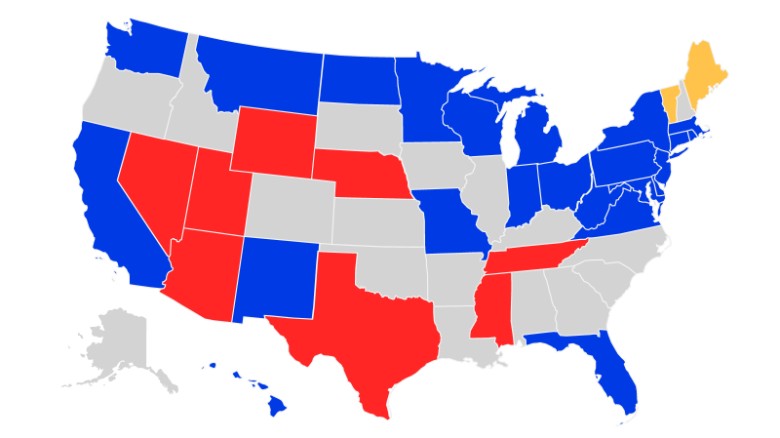 The 2018 Midterms: Turnout Results in Turnovers

November 6, 2018: the date of the midterms. Election day saw record turnout numbers, history making wins, and shows the power of an engaged youth in America.

The big push to encourage voters to go to the polls this year made an impact. About half of eligible voters turned out at the polls, a 10% increase from 2014. Also, while Democrats voted more than Republicans this year by a 9 million vote margin, both parties had a similar increase in voter turnout from 2014. Ultimately, did the “Blue Wave” happen? Yes and no. There was certainly an energy from the Democrats that they lacked in 2016 to take back 40 seats in the House, their largest one-time gain since 1974. The Republicans lost a lot of ground in the House and were unable to win in important races. However, the Republicans still have control, and gained seats, in the Senate which is now 53-47. Regardless of numbers, the attitude and enthusiasm of the country toward the election this year is one that has been absent for far too long.

Tuesday, November 6, also brought a historic night of firsts for women and minorities. Before the election occurred, there was already the most diverse pool of candidates voters could choose from in American history. Next year’s Congressional class will have, for the first time, over 100 women in its ranks. Some of the most notable members of the incoming Congressional class are the first Native American women, Sharice Davids (D-KS) and Debra Haaland (D-NM), with Davids also being the first gay Native American elected; Ilhan Omar (D-MN) and Rashida Tlaib (D-MI) became the first Muslim women elected; and Alexandria Ocasio-Cortez (D-NY) became the youngest woman elected to Congress at 29 years old, taking over the title from her fellow New Yorker Elise Stefanik. In the Senate, Marsha Blackburn (R-TN) and Kyrsten Sinema (D-AZ) will become the first female Senators from each of their respective states. Sinema will also become the first openly bisexual Senator in history. In addition, the following firsts will also be taking the Governor’s seat: Jared Polis (D-CO), the first openly gay governor of any state; Kristi Noem (R-SD), the first female governor of South Dakota; and Janet Mills (D-ME), the first female governor of Maine.

From the results of this election, many, especially on the Democratic side, are looking toward 2020. If Democrats want to take back control of the White House, they will have to keep the momentum from this election and make important gains in the areas where Republicans are on shaky ground. Many Democrats see the loss of Beto O’Rourke in the Texas Senate race as a building block and believe, based on the way he was able to turn Texas purple, that he is the party’s best chance to defeat, presumably, Trump in 2020. The Democrats problem is their lack of diversification of their voters. Whether they want it to or not, the Electoral College exists and they will not win in 2020 if they can’t swing the important states that Trump was able to take in 2016. The Republicans, on the other hand, have to try to re-enchant their voters. The Republicans were certainly energized this election cycle as well, but they need to capture the youth vote. More than two-thirds of voters 18-29 years old voted Democratic, jumping 14% from 2014. Republicans have failed to realize that the young voters are the future, and if they do not recognize their power in the polls, they will lose in 2020. While it is almost a guarantee that Donald Trump will be the nominee in 2020, the 2018 exit polls show two-thirds of voters said their vote was about him, but that’s not necessarily a good thing. Only a quarter said their vote was in support of Trump, while 40% said it was to show their disapproval. Only three out of ten said they approve of Trump.

Ultimately, the 2018 Midterm Election was an important moment for America as a whole, but also for the youth of America. College and high school students are seeing the importance of voting thanks to organizations such as March For Our Lives, founded by the Parkland shooting survivors, encouraging young people to become civically engaged. No matter what party they turn out for, if 18-29 year olds, the age that historically holds the lowest turnout, can mobilize they will change the country, and even the world.