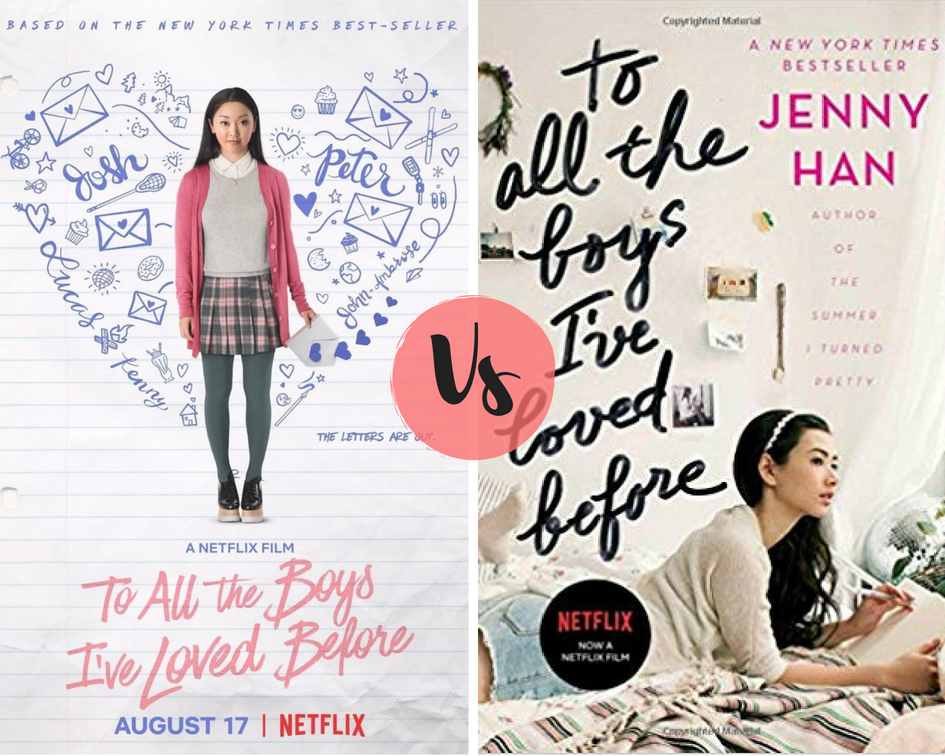 The Book Vs. The Movie – To All The Boys I’ve Loved Before

When Netflix’s rendition of Jenny Han’s novel To All The Boys I’ve Loved Before first premiered in late 2018, it was an immediate hit – especially among younger viewers.

The sweet, innocent story of Lara Jean Covey’s accidental love story is perfectly cliche. She, sixteen, is shy and rather reserved for her age – at least, according to her nine-year old sister, Kitty. With good intentions, Kitty sneaks into her sister’s room one night and mails five love letters Lara Jean had hidden in her hatbox, hoping it’ll take her sister’s nose out of all her romance books and give her a chance at a real relationship. These letters, though addressed and sealed, were never meant to be sent (Lara Jean had written them for the same purpose of writing a diary entry). To complicate things, one of the love letters had gone to her older sister Margot’s ex-boyfriend, AND Lara Jean’s best guy-friend and neighbor, Josh. The two had broken up because Margot went off to college in Scotland, but Josh, a year younger, was home and in school with Lara Jean.

Though, Lara Jean doesn’t realize the letters had been sent until Peter Kavinsky – the most handsome and popular boy in her school (and, actually, one of her middle-school best friends) – approaches her with it. With a few fun and awkward encounters in between, the two eventually settle on a contracted fake relationship, one to benefit them both; for Peter, it’d make his ex-girlfriend jealous, and for Lara Jean, it’d fool Josh into thinking she doesn’t have feelings for him.

The rest of the movie is a mix of emotion as the two attempt to make sense of their forced relationship. I won’t spoil the ending, though I will say that almost everyone who has watched has agreed upon a favorite character (and Lara Jean agrees).

The movie was refreshing. A modern romantic comedy – something that doesn’t happen as often as it should. A lot of the favorite rom-coms are from the 90’s and early 2000’s, as people tend to gravitate towards titles like “10 Things I hate About You” and “Clueless” because they’re considered classics to the younger generations who grew up on them. Though, “To All The Boys I’ve Loved Before” is more reflective of high-school students today, and gives modern-day teens a quality film to fawn over and call their own. And, it was based on a book – so, if anyone is like me, the first thing they’d have done after finishing the movie is read the book it was based off of.

The novel shares the same basic premise as the movie, but with more plot and drama and “cute” moments between the characters. There is more depth to each character’s background – inevitably because there is more room to elaborate in a 300 page book than in an hour and a half film. Yet, with the descriptions of Josh and Margot’s relationship, of Peter and his ex-girlfriend, and of Lara Jean and all of the people from her past and present, the story in book-form is much more appealing. Lara Jean’s voice is just as she acts in the movie, but there is more she is able to say. Each character is given a bigger stage, and more time to present themselves, and so the rest of the story is heightened naturally because of it. I understand not everyone enjoys reading and is relieved it was made to be a movie, but the book is a fast-read and is written very colloquially. If you are a fan of the movie, it really is worth the time.

There are two sequels to the novel – P.S. I Still Love You and Always & Forever, Lara Jean. I’ve just finished the second book, and am eager to start the last. For sequel-purposes, the first book does not end as the movie does (the book is left on a cliffhanger), and so the movie seeps into the second book a bit. Still, not much was changed – only some was deleted.

It is impossible to say which was better, because preference is the deciding factor. I’d choose the book in a heartbeat, because I love how much more I learned about each character as opposed to in the movie. Nevertheless, both are must-sees/reads. I hope that, if you haven’t already, you’ve been inspired to hear Lara Jean’s story, because it really is something special.